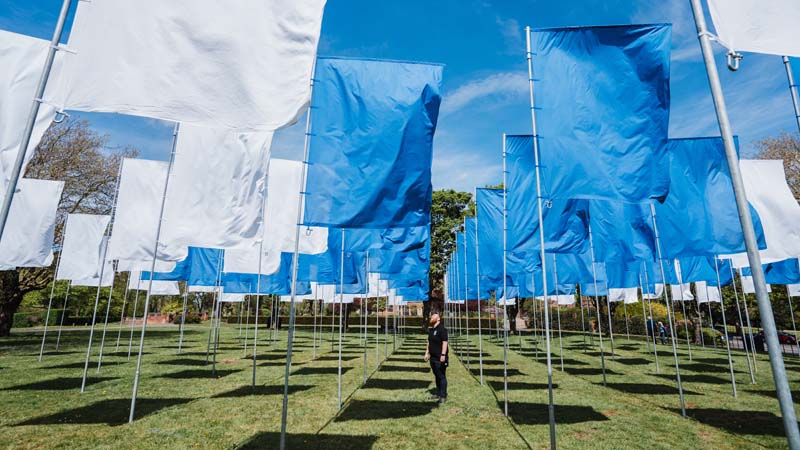 In Memoriam is an artwork by Luke Jerram commissioned by The Weston Arts + Health Weekender for presentation on Weston-super-Mare beach, once the COVID-19 lockdown in the UK has ended.

The installation is a temporary memorial for the public to visit and remember all those we have lost in this crisis. The artwork is also made in tribute to all the NHS staff members and volunteers who have been risking their lives during the COVID-19 pandemic.

Created from over 100 hospital bed sheets, the flags are arranged in the form of a medical logo. The number of flags will be designed to symbolically reflect the number of people we have lost this year in the UK epidemic.

Luke Jerram’s multidisciplinary practice involves the creation of sculptures, installations and live arts projects. Living in Bristol, UK but working internationally, Jerram has created a number of extraordinary art projects over the last 21 years which have excited and inspired people around the globe.

Jerram is known worldwide for his large scale public engagement artworks. His artwork the Museum of the Moon is one of Luke’s newest arts projects that has caught the public’s imagination which is currently touring.

Experienced by more than 10 million people worldwide, the artwork has recently toured India with the British Council, been presented at the Commonwealth Games in Australia and exhibited in Aarhus, Denmark for the European Capital of Culture.

Jerram’s ongoing research of perception is fuelled by the fact that he is colour-blind. He studies the qualities of space and perception in extreme locations, from the freezing forests of Lapland to the sand dunes of the Sahara desert. New ways of seeing and new artworks emerge from these research field trips. Works such as ‘Retinal Memory Volume’, Sky Orchestra and his Glass Microbiology series have emerged from Jerram exploring the edges of perception. Published by The Watershed, ‘Art in Mind’ is a book written by Jerram that tracks much of his perceptual research.

Luke Jerram lives in Bristol UK with his wife and two children.