Jodie is Artistic Director for SpareParts and the Creative Producer for Transported, Fleetwood,

TRANSPORTED: A Reflection from Fleetwood on Loss, gains and intentions

Living through a global pandemic has meant a lot of change for people across society.  What that has looked and felt like is different for each of us. When you speak with most people, their experience has not been static, nor one note. However, broad themes that have emerged have largely focused on three areas; the losses that people have experienced, the benefits or advances that some have gained, and, the hopes and intentions that people wish to carry forward for themselves, their families, communities or the environment.

Following so much isolation, TRANSPORTED creates a collective event and opportunity for people to gather safely together, whilst giving time and space for people to explore and reflect upon the diverse lived-experiences of others from their community.

SpareParts was born and bred in Fleetwood in 2014. Originally it was a partnership project between the Creative Project and People’s programme based in nearby Blackpool, LeftCoast, and Fleetwood Festival of Transport (FFoT). The idea was to introduce outdoor arts and performance to a hugely popular annual event called Tram Sunday. Tram Sunday is a longstanding transport and heritage festival organised by FFoT, a lively and committed volunteer group in the town. The event regularly attracts 50-60k people and was therefore a great platform to reach audiences who did not usually attend professional arts venues and festivals. Many years later and SpareParts has developed into a project team of Freelance Creatives, run out of FFoT, whose work extends into four other locations across the North West and is funded through ACE and our associated partners.

Understandably, FFoT did not feel able to run their festival in 2021; the risk being too great to organise an event that has the ability to attract so many people to the streets of Fleetwood. Instead, I was challenged to consider how we might create something artistically striking and pertinent for, and with, the communities of Fleetwood and Wyre, whilst maintaining a connection to our transport-related roots, respecting the societal and personal shifts that have occurred and ensuring public safety.

A reflection from Fleetwood in three parts:

The response is TRANSPORTED; a programme of three artworks that safety enables audiences to gather outdoors to share, to listen and to reflect on their recent individual and collective experiences. TRANSPORTED features In Memoriam by Luke Jerram, a newly commissioned sound artwork incorporating reflections from local residents by Ant Davey and a community installation piece called Flag-Up.

The artwork and activity will map across two magnificent areas at the sea front; Marine Hall Gardens and the newly restored iconic Mount opposite; all set against the dazzling Irish Sea as an ever-changing back-drop.

Opening and Closing – a daily rite of passage

To open our daily activity, we will begin at 11am and close at 4pm with a gesture that connects to our origins; connecting arts programming with transport festivals. 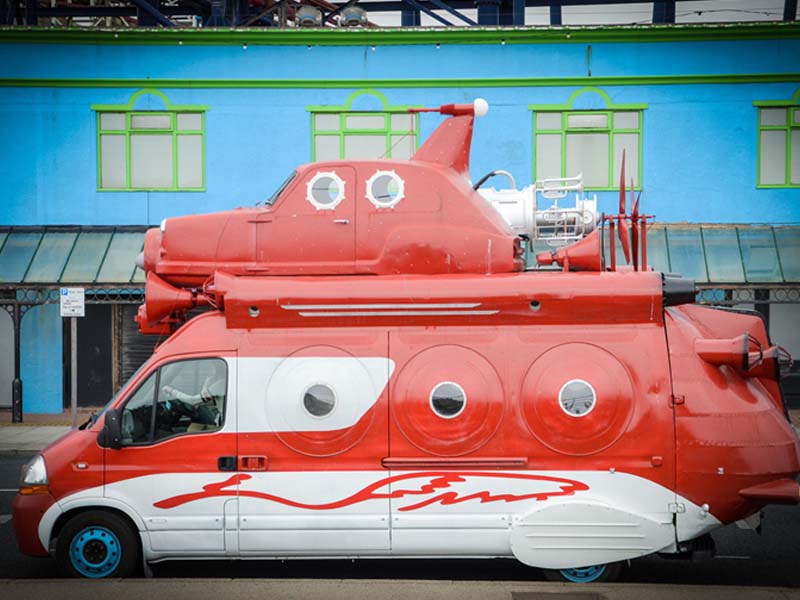 Parades have always been a key feature at Tram Sunday. While it isn’t possible to have a large-scale community and vehicle parade this year, each day will be bookended with a small rite of passage and miniature parade to open and close TRANSPORTED.

Each morning, a community member carrying a red flag, will circle The Marine Hall Gardens, to plant a billowing red flag and officially open TRANSPORTED for the day. The flag carrier will be followed by the extraordinary LeftCoast Save our Stories vehicle. Then at 4pm the act will be repeated, but this time retracting the flag and thereby closing TRANSPORTED for the day (although In Memorium will remain fully accessible to the public).

For those knowledgeable in transport history, you will already note the heritage connection. The red flag is a reference to a law enacted in the late 19th century, which required drivers of early automobiles to take certain safety precautions, including waving a red flag in front of vehicles as they travelled.

Whatever losses, gains and intentions the past year has meant to our visitors, we hope to create a memorable event that enables space to safely gather with others, reflect on individual journeys, hear reflections from others in their community and take a moment to look up, look out and be momentarily… TRANSPORTED.

Jodie is Artistic Director for SpareParts and the Creative Producer for Legends, Lights and Lullabies.

Collaborative approaches to culture and place-making; a road-map back to event delivery in Sandbach.
By Jodie Gibson

Finding creative solutions to the situations we find ourselves in, is something everyone is having to do at the moment.

Usually, SpareParts work in association with Sandbach Transport Festival each spring, to bring live performance and community participation programmes to their transport and heritage festival.

With large-scale public events not able to take place when their festival would traditionally happen, the voluntary festival committee who organise Sandbach Transport Festival decided to postpone their event until 2022.

My challenge was to artistically imagine a way of marking the usual transport festival held in April, whilst offering something for the communities of Sandbach that would have a wow-factor, create a positive talking point in the town, elevate spirits and allow for lots of different levels of participation (live and digital). And be as safe as possible, of course.

Luke Jerram’s piece Lullaby, was an ideal starting point; a magical bike parade and audio artwork that passes by people’s homes at dusk. The twinkling lights, coupled with a musical score by musician Andy Taylor, passes by the windows and doorsteps of local residents, via 30 local cyclists who power the performance. It would offer a playful, surprising alternative at children’s bedtime; yet something enchanting for all ages.

By programming Lullaby, it gave me the opportunity to consider how else we could develop the idea creatively for Sandbach’s context. How does the event speak to the particular places and personalities of Sandbach? How else could we expand on the bedtime parade and lullaby that would pass-by people’s homes?

The idea of creating a new bedtime story for Sandbach emerged. A story that could be delivered to residents in the days leading up to the parade. Something that could set the scene for the bike-parade that would follow. Something that grounds Lullaby, that has featured internationally, firmly in its locale in Sandbach. Through creating a printed story that could be delivered to residents, we would also include the many people who have not been able to connect to cultural opportunities and events online during the pandemic. We are going to bring the story and the spectacle, to the people.

One of the strong features of our work is collaboration. A key partner in Sandbach, is Minerva Arts who head-up our participation programme. This year their lead practitioner, Emily Edwards, recruited a team of Young Producers from Sandbach to work with me on all aspects of delivery; from contributing creative ideas, to marketing/promotion and event planning.

When we did a call-out for North West Writers to work with us on a commissioned story for Sandbach, the Young Producers were involved in the selection and interview processes. With their input, we selected Manchester-based writer, Matthew Smith, for his proposal called Chuck the Trucker. It is an inter-generational story about how a despondent retired truck driver, Chuck, gains a verve for life when his young neighbour, Jade the Unafraid, teaches him how to ride a bike in order that he can continue having adventures in his retirement.

As part of their participation programme, Minerva Arts also commissioned an artist from Sandbach, Carl Waine, to illustrate the story. To further the co-creation work that Minerva Arts advocates, Carl led an online weekend intensive with the Young Producers to generate ideas from which he will create the illustrations that will accompany the book.

Additionally, Minerva Arts have commissioned Musician, Leo Mercer to create a digital arts project to accompany our work in Sandbach. Leo will be writing a new song, based on the story of Chuck the Trucker, with an original score. People from the area will then be able to record themselves signing the song and Leo will curate the contributions into a digital, collaborated artwork. With groups of people still unable to meet physically, this is a way of involving more numbers of people through online participation.

We look forward to sharing our newly commissioned song and illustrated story, along with Lullaby, Luke Jerram’s enchanting bike parade, people-powered by the residents of Sandbach.

Legends, Lights & Lullabies is a collaborative project, co-created by a host of Artists and Creatives, that I am thrilled to be producing for Sandbach.